Each year before the start of the triathlon season a Performance Assessment Weekend takes place to rank all the best Youth and Junior triathletes in the country with the top ranked gaining entry into the season long Super Series Races that are held around the country.
This year the swim trial was on the Saturday in Nottingham with the combined bike/run on the Sunday in Loughborough.

Day one started with an 400m pool swim for the Youth As and an 800m swim, for the Youth Bs.
In the Youth A Category Ethan had a strong swim to put himself nicely in amongst the stronger competitors whilst Innes and Josh were a little further back.
Jack and Ben had almost identical 800m swim times to be well placed. Helena struggled a little and was towards the back of the Youth B girls.

On the Sunday the athletes were set off into T1 based on their swim times...the faster swimmers going first. The Youth As had a 10km bike and 2.5km run to contend with. Innes had her usual fast T1 transition and a really strong bike to move her nicely up the field. Unfortunately she then developed a stitch during her run which meant that she eventually finished in 65th place...still an excellent performance at her first Assessment. Ethan did himself proud with really competitive bike and run legs to finish a superb 28th. Josh pushed hard all the way and eventually came in 88th.

The Youth Bs had double the distance to tackle, a 20km bike and 5km run. Helena moved steadily through the field on her stronger two disciplines and finally placed 15th. Jack hunted down the leaders on the bike and with his superb transition skills and solid run came in 4th. Ben, in his first Assessment, worked really well on the bike and just faded a little on the final run, but can be delighted with his final 34th place.

Based on their performances, Ethan, Jack and Helena are guaranteed starts in the initial Super Series races and there is a very good chance that Innes and Ben will also get some races slightly later in the season.

To have 6 children from one Club competing at this National level is brilliant for WaldenJNR and we'll hopefully have more in future years.

All in all a very promising weekend! 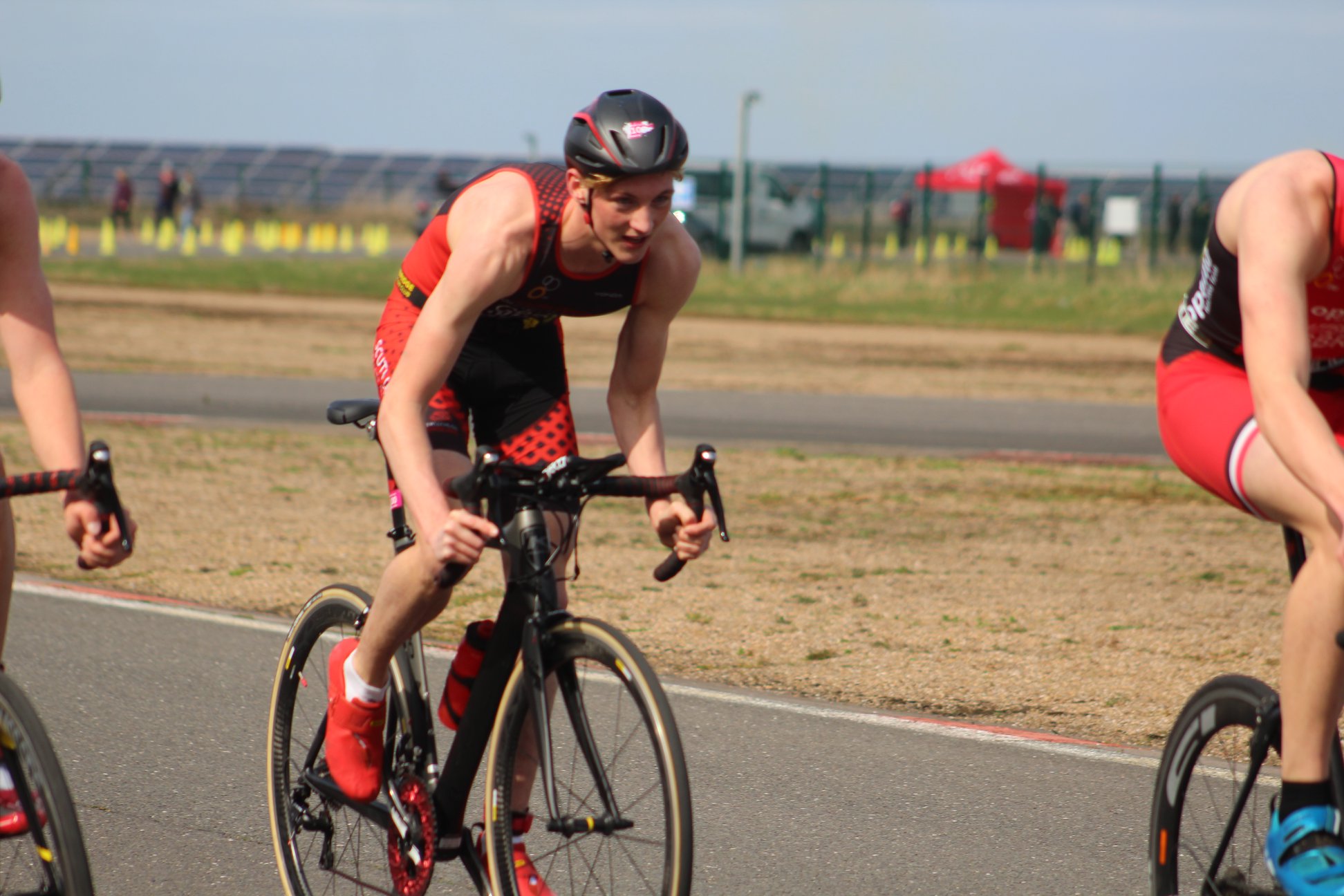 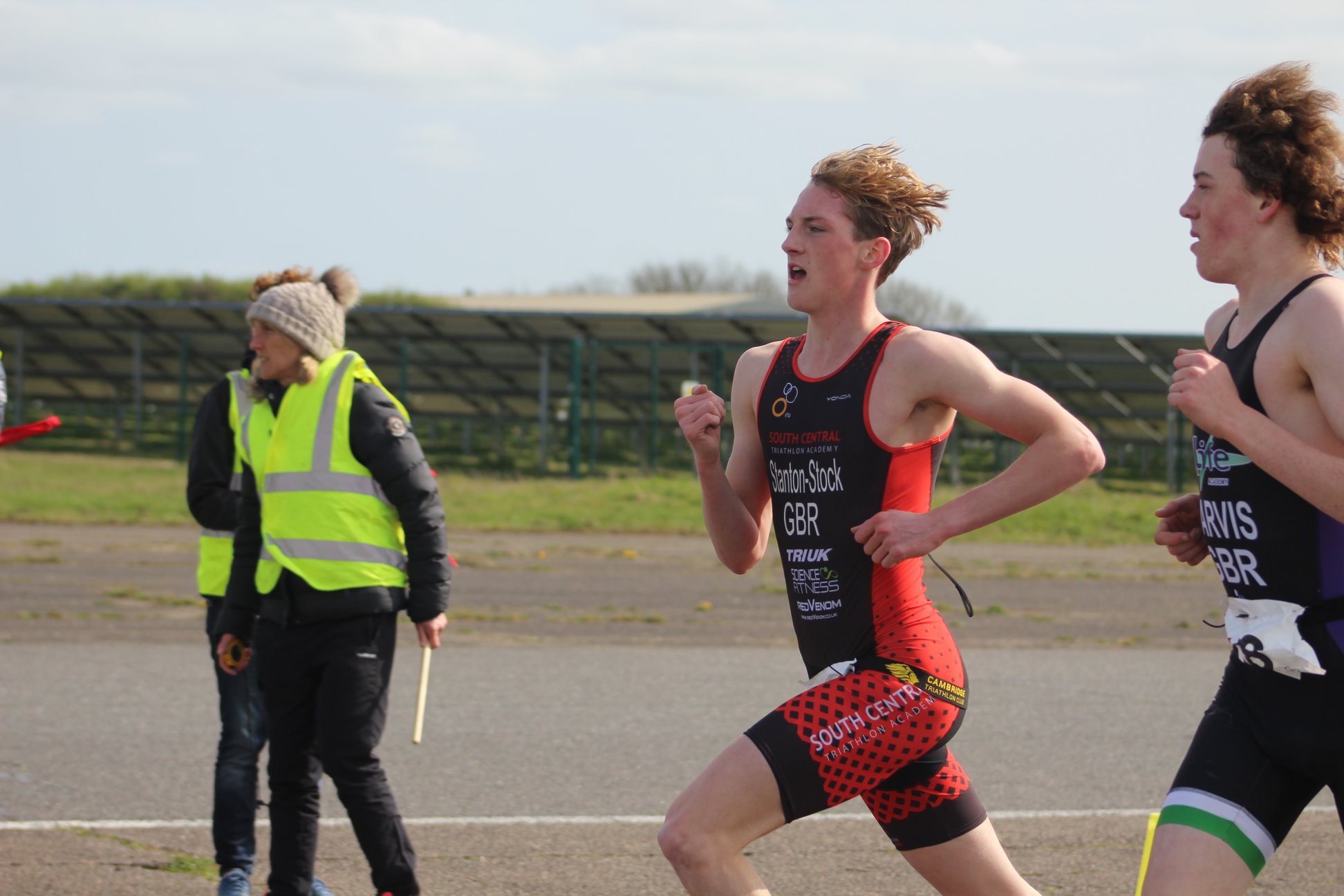 Group C athletes George, Annabel, Nathan, Charlie and Jack with Group C Coach Nicola decided to complete the Isabel Hospice 50K road cycle event today (22/5/2016) They started in Bishops Stortford and followed a hilly course out towards Clavering and surrounding villages before returning. Deciding Nicola was cramping their style the Group C riders left her behind after about 500 meters and at 15K Annabel and George crashed at a junction after some confusion with a marshals directions. All waited for medical assistance and Annabel was bandaged up but George had injured his hand and sadly had to withdraw. Not wishing to cramp their style any further and not being competitive!! Nicola plodded on and managed to finish first out of the 6 and first female overall. Whilst Coach Chris, Nicola and Tabitha Stanton-Stock nervously waited, a familiar face glided gracefully and effortlessly in to the finish, being Kate Bozianu, again another adult ahead of the group C athletes. 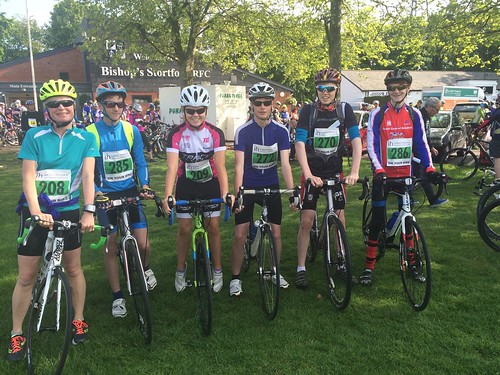 The group finally came in together one hour later with Annabel's new bikes wheels looking like 50 pence pieces, they still managed to have smiles on their faces after the ride. With further patching up by the medics, they then consumed ice cream and burgers (yes in that order!) and the Hare and the Tortoise analogy was dropped in to the conversation a few times by the tortoise adults!

Having now set down the gauntlet and wanting revenge the Hares want to enter some more events later this year but with more tortoises (parents) to try and beat next time. The next event they are considering is the Hertford Mudlarks 25 mile event on Sunday 12th June 2016 after the Norwich Junior Tri on the Saturday. Tortoises so far are Chris and Nicola and perhaps Tabitha, come out of your shell and please help! 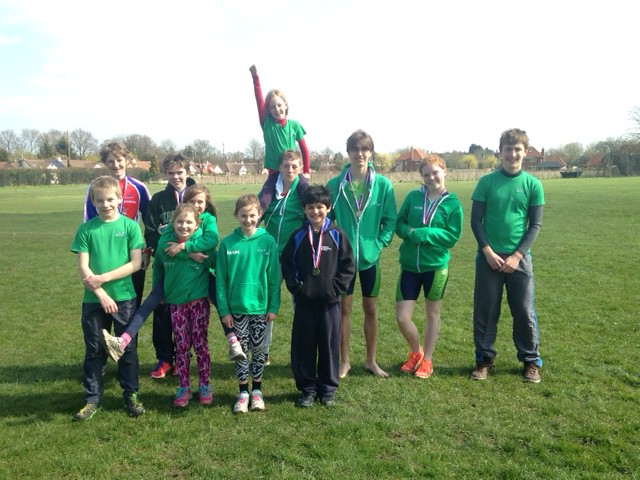 It was the first opportunity for many competitors and parents to meet each other since the previous season, and it was startling to see just how much how many of the kids had grown in the preceding six months. Many kids had, of course, moved up an age category for 2016 and it was their first chance to experience their new, longer race distances.

However, for many spectators (regardless of their club allegiances) the stand-out performance of the day was that of eight-year-old paralympic TriStart competitor Millie Partridge who completed the rough, grass run section in her wheelchair – a tremendous feat which earned her huge applause as she crossed the finish line. Superb!

The club had more success at the country’s biggest junior open water triathlon at Hever Castle. There were over 600 competitors in the Tristar 1 and over 200 in the Tristar 3 age groups. 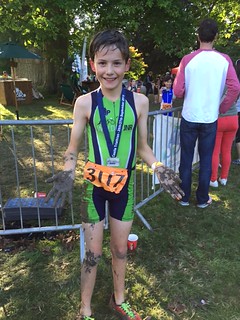 Jake Latham was competing in his first open water swim and despite this he swam well and got out of the lake 3rd in his wave and then really moved up the field on the run and cycle as the course suited his strength as it was long and hilly. Despite a muddy fall on the run he finished as the overall race winner. Not far behind in 11th place was another WaldenJNR Lewis Buchallet. 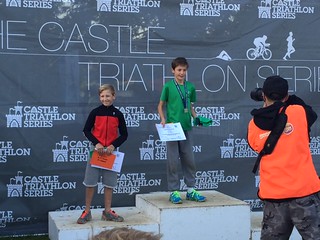 In the Tristar 3 race Helena Dyce finished on the podium in second place whilst Jack Stanton-Stock just missed the podium in 4th place.

Four young members of WaldenJNR Triathlon Club travelled to Mallory Park in Leicestershire for the National IRC Triathlon Championships. All were representing the Eastern region in the championships and had qualified for the team in a series of local races earlier in the season. The event brings together all the best triathletes from the different regions and England, Scotland and Wales.

James was off first in the boys race at 9.00am in chilly air and into a very cold lake! He followed a good swim with excellent transitions and a typically strong bike leg before finally running strongly to finish in a very creditable 14th place.

Angharad was next up and she used her national level swimming skills to exit the 200m open water swim in 5th place. She found the bike leg tough against some much more experienced rivals, but hung on in through the final 1.3k run to finally finish in 31st position.

Jack, in his first year in the TS3 category, was up against some really strong mature boys. However, a great 350m swim meant he within touching distance of the leaders, and with fast transitions he was able to bike sensibly to hold his position. He then unleashed a barnstorming final run to move up 7 places to finally finish in a brilliant 8th place overall.

Helena was clearly motivated by Jack’s great performance and despite a delayed swim start she swam effectively and had a slick first transition to be mid pack on the bike. He worked well with anther Eastern team member and came off the bike in around 15th place. She then surged through the second transition and was quickly into her stride, picking off the faster swimmer and bikers. By the end of the first run lap she was up into 4th place and still running strongly she ended up a brilliant 3rd overall.

For a single Club to have 3 triathletes in the top 15th nationally is a tremendous achievement and an indication of how strong and committed the coaching set-up at WaldenJNR is.

Helena Dyce and Ross Broomfield won first place in both events in the tri-star 3 girls and youth boys categories respectively.  Helena’s win at Upminster being all the more remarkable due to her swimming two lengths of the pool too many in error!  Meantime at Upminster James Fraser added to his trophy cabinet by winning the tri-star 2 (boys) category. 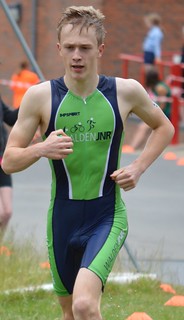 Overall, there was a great turnout at both triathlons by Walden Junior triathletes. Congratulations go to all who took part. #RoarLikeWallace WALDEN!

A new exciting venue and an open water event to boot enticed a good hard core of WaldenJNR members to race at Writtle College on Saturday.

Maybe it was the unfamiliar surroundings but there were strained nerves aplenty. Anonymity will be maintained but sulky silences, tears, manic chatter, thrown transition boxes were all witnessed a good 1 hour before any racing took place! Parents tread very carefully in these fraught times; a well-meaning comment isn’t always appreciated. Clearly the children care greatly but if we could come up with a recipe for calm preparation we would be onto a winner. In fact, amongst all the tension there was Benjamin Furrer who exuded almost Zen like calmness.

The Tristarts were first off and given that Speedo haven’t come up with an XXXS wetsuit they were challenged to a Duathlon.  Georgie Collett and Alex Asbury raced wonderfully and both came home 2nd in their categories. The way they both sprinted off at the start of their races had to be seen to be believed! Smooth transitions showed that Group S coaching is in very capable hands.

Mia Hickey was the sole WaldenJNR representative in Tristar 1 and therefore the first to brave the lake. The children were kept waiting a lengthy time treading water before the off, but this didn’t put Mia off and she raced a really consistent race, exiting he water in 4th place and maintaining that through the bike and run. 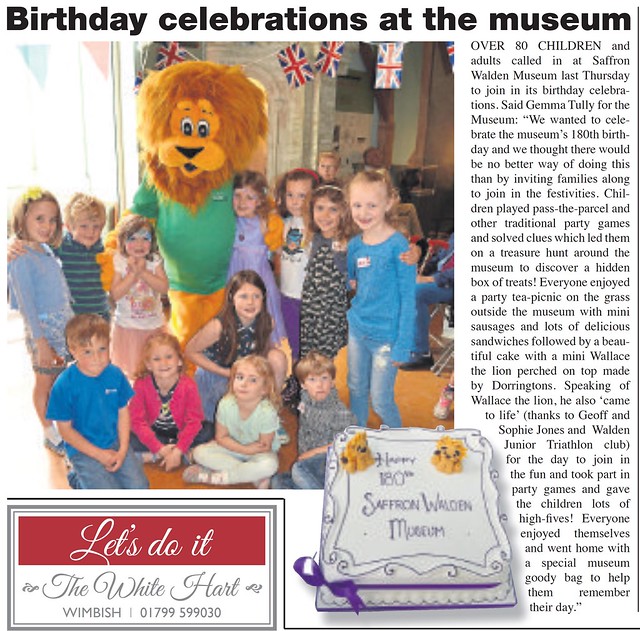