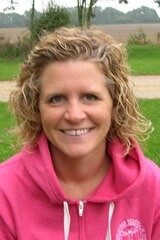 Issy joined the coaching team in September 2014 and is a Group 2 coach and is currently completing her Level 2 coaching course (Autumn 2017).